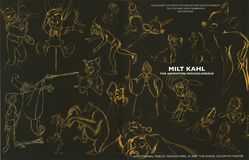 The following tribute was written by Mare Davis, Milt Kahl’s longtime friend and fellow Disney animator, shortly after Milt's death in 1987. Presented here in its entirety, it is a unique testament to their shared artistry and friendship.

Milt Kahl left a legacy of superb animation that says, much better than words, who and what he was as a creative artist. For those of us who were close to him, his animation and drawings have a distinct personal style, easy to recognize. It is crisp and to the point. The animation never moves just to move, it moves to make a point or tell a story in the most direct and interesting way. The superb humor of the Ilama and Donald Duck on the swing bridge in SALUDOS AMIGOS is classic. His Tigger in WINNIE THE POOH, and the Fox, Rabbit and Bear in the Uncle Remus film are favorites, but the list goes on and on. THE UGLY DUCKLING, CHICKEN LITTLE, REASON AND EMOTION and TIGER TROUBLE are other short subjects that bloom from Milt’s brilliant animation.