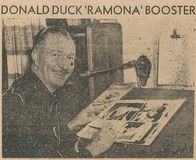 from cbarks.dk:
is a common misconception that fans first discovered Carl Barks as a Disney duck artist in the late 1950's, because his name in that particular field was in fact disclosed many years before. The proof is presented here! It is a newspaper article from his local region in the San Jacinto Valley area in California. The name of the newspaper is The Hemet News and the article is dated April 6, 1951! At the time Carl and his wife Garé were a fairly well known couple in the San Jacinto society mostly due to Garé's paintings, but not even the neighbours knew that her husband was writing and drawing numerous Disney duck stories. That all changed with this article, that even was on the front page!
So enjoy the positive article rendered in full below (although the journalist made a few minor, factual mistakes), which is the very first interview Barks ever made about his beloved ducks...

Donald Duck—world traveler, entrepreneur, sportsman and the gentleman whose activities are followed by more persons than any other American, with the possible exception of President Truman
or Mickey Cohen—recently made a visit through the Hemet-San Jacinto Valley.

If you don't believe it, just take a look at the current issue of Donald Duck comics. And if Ramona herself had met Donald Duck in person, she would have been no less surprised than some valley parents who found the pageant mentioned in the comic books of their children.

The man behind the duck who was behind the chamber-ot-commerce-pleasing advertisement of the Ramona Outdoor Play and the valley in general is Carl Barks, San Jacinta resident and cartoonist. Mr. Barks drew the 28-pages of pictures and wrote the story which takes Donald and his three nephews, Dewey, Hughie and Louie, through the valley on a tour of “Old California.”