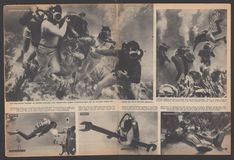 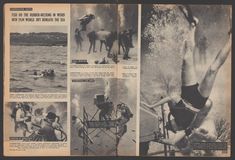 [img]EVEN JULES VERNE with all his vivid imagination probably never conjured up a weird figure like the characters above. They are working on the underwater set for Verne’s book, 20,000 Leagues Under The Sea.[/img]

AS though movie-making in sunniest Hollywood and darkest Africa were not difficult enough, a Walt Disney location crew is now filming one 30ft underwater. In the Caribbean, off, Nassau, in the Bahamas, 83 actor-divers, cameramen, propmen, professional’ salvage men, lifesavers and directors are trying to make their Cinemascope version of Jules Verne’s science-fiction classic, 20,000 Leagues Under The Sea, as authentic as possible.

The result has been the greatest underwater venture in film history. Daily the crew has to cope with choppy surface, undersea turbulence, leaky air-valves on diving-equipment, a complicated communications system and sunlight that seems invariably to hide whenever all the other conditions are right. Toughest problem has been the diving-gear itself. A new type had to be invented to clothe the fabled Nautilus crew—Victorian-looking (see above), yet practical and self-contained, because that was the way Jules Verne imagined it for his mythical hero, Captain Nemo.

[img]Two Hollywood propmen (in winter woollies) and underwater guides manhandle 400 lb net of crayfish across seafloor for use in harvest sequence.[/img]

[img]PROPMAN  ONE of the crew’s two Hollywood propmen hauls a 9ft wooden prop wrench into position for the scene in which Nautilus crewmen leave their crippled submarine to repair its damaged propeller on sea-bottom. Propmen also had to lug about huge carpet used to keep sand in area from churning up before camera.[/img]

[img]SEAWEED HARVEST  CAPTAIN NEMO’S men harvest seaweed with four-pronged pitchforks. Harvest is helped along by propman (swimming), who passes down a net. This is greatest underwater venture in movie history.[/img]

[img]COMMUNICATIONS CHIEF  ONLY diver in regulation suit with surface airlines and built-in telephone, salvage-man Frank Higgins stays on the bottom most of day. Alert during operations, he often lies down for a nap during long waits when skin divers are kept out of the water by bad weather.[/img]

[img]DIRECTORS' CONFERENCE  CHIEF CAMERAMAN Till Gabbani, director Fleischer and underwater co-ordinator Zendar come to surface to discuss changes in shooting plans when hand signals and slate-writing 30ft below get too complicated. They have to watch for sun, too.[/img]

[img]FLORIDA salvage expert Eddie Ciesinki bolts down water-proofed, self-powered camera. He is responsible for safety of camera, crew. Like most skin-divers, he works best upside-down.[/img]