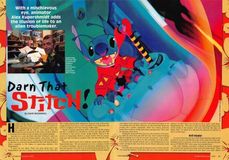 He looks awfully cute, but if you're not careful, he'll eat your Volkswagen. He's Stitch, the misbred result of an illicit scientific experiment gone bad (more or less), a genetic mutation imprinted with the need to cause havoc, chaos and destruction (not necessarily in that order). In short, Stitch is a one-thing-from-another-world wrecking crew (patent pending).

And now he's a star, the fluffy alien half of Disney's latest animated hit Lilo & Stitch (his human partner — and owner — Lilo is a Hawaiian tyke). Actually created 17 years ago by Chris Sanders (who co-directed, co-wrote and storyboarded the film with Dean DeBlois), Stitch scrambles to life thanks to supervising animator Alex Kupershmidt.

"I knew he was lethal. That's the point about him," says Kupershmidt, who was in charge of the character for the entire film. "He's totally indestructible, bulletproof, fireproof, able to lift all this weight and just toss it away, with a mouthful of very sharp teeth. But all of it's wrapped in this neat, friendly, cuddly shape.

"Stitch is a genetic experiment, #626, created in a lab. He escapes and then is recaptured by intergalactic security, and when they find out what he is, they jail his creator, Jumba Jookiba. They're in the process of transporting Stitch to a prison facility when he escapes again and lands on Earth by accident. That's the nuts and bolts of his origin."

However, Stitch started out in a different, darker fashion. Initially, Kupershmidt notes, "He was presented sort of as a criminal, a leader of a gang of hooligans, who go across the galaxy delighting in mayhem and nonsense, but as the story [development] progressed, he was instead made into a weapon engineered by Jumba in the lab. Stitch's only purpose was to destroy. And then in this third incarnation, as we were nailing down the film's third act, we discovered that Stitch was actually just a genetic experiment. There was nothing malicious behind him except for Jumba [and others pursuing him]. That's how the character came about.

"Originally, Dean and Chris gave me a short printout of his planet, where he came from and stuff like that. And I started inventing Stitch's anatomy as to why he can have such powers, what enables him to be the way he is and so on. But eventually, all of that material just fell to the wayside because once it was decided that he was unique and that he had come from the lab, Stitch could pretty much do anything."

All of that alien research and development wasn't a total write-off. "You need the backstory in the sense that you're only going to show glimpses of what's there, but you have to know what's really there," Kupershmidt says. "You have to show the right things, because otherwise people in the audience will sense intuitively that there are things amiss. No matter how ridiculous the character, he still has to have a certain logic."
[…]