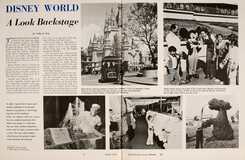 There's enough land here to hold all the ideas and plans we can possibly imagine," said Walt Disney back in 1964 as he discussed his plans for Disney World. "With the technical know-how of American industry and the creative imagination of the Disney organization, I am confident we can build a living showcase that more people will talk about and come to look at than any other area in the world."

Disney World, which is moving up to the top of the list of destinations of greatest interest to Panama Canal employees heading for family vacations in the United States, is living up to all of Walt Disney's expectations.

Located near Orlando, Fla., it is not only a popular vacation spot but it is attracting architects and engineers, who want to take a look behind the scenes and see how it all works and works SO well. They come to learn how ecological problems have been solved, new ways of city planning, about garbage collection and flood control.

One of the ideas in which there is great interest is Disney World's basement which covers 8 acres. Disney World, boasts that it has the largest basement in Florida.