Blaine Gibson was a Disney Legend who worked both at the Walt Disney Studios and Walt Disney Imagineering (then known as WED Enterprises). As an animator, Blaine worked on classic projects that included Bambi, Fantasia, Alice in Wonderland, Peter Pan, Sleeping Beauty, and One Hundred and One Dalmatians. Recognizing Blaine’s remarkable talent for sculpting, Walt then asked Blaine to join WED Enterprises, where he worked on Disneyland, the 1964 World’s Fair, Walt Disney World, and more. Blaine sculpted such iconic figures as Abraham Lincoln (Great Moments with Mr. Lincoln), the pirates from Pirates of the Caribbean, the family from Carousel of Progress, the ghosts from the Haunted Mansion, and many more. Blaine also supervised the sculpting of every U.S. President in the Hall of Presidents from George Washington through George W. Bush (he acted as a consultant for Barack Obama before passing away in 2015). Perhaps his most visited work is the Partners statue, which is the statue of Walt Disney and Mickey Mouse in the Hub, as well as the Sharing the Magic statue of Roy O. Disney and Minnie Mouse in Town Square.

In this episode, I have the pleasure of chatting with Blaine’s son, Wes, about his father’s life, career, and legacy. Wes also shares some first-hand experiences about meeting Walt, experiencing Disneyland opening day, and witnessing his father’s work behind the scenes. 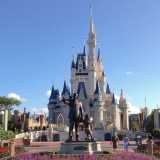