Hear from some of the talented women bringing magic to life for guests at Disney Parks around the world. Leaders from Walt Disney Imagineering, Disney Parks Live Entertainment and Walt Disney World will share their stories about leading and inspiring teams to continue to create new and innovative experiences that immerse guests in stories they love.

This session is a Panel Discussion Presented by: 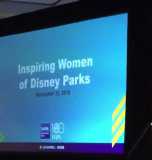