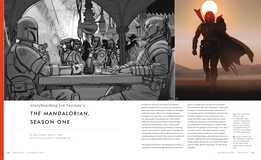 As Head of Story for Jon Favreau on Disney's hybrid remake of The Lion King, the storyboard team and I were challenged to help Jon reimagine a beloved classic. When our storyboard duties wrapped up on that film, Jon confided in me what our next project was going to be. Little did we know the show we were about to embark upon, entitled The Mandalorian, was to become the centerpiece of the upcoming Disney+ streaming service, and thanks to "Baby Yoda," a worldwide cultural phenomenon. We would soon learn that storyboarding the show's first season would be as epic as the adventures we were about to draw.

Jon pitched the idea for The Mandalorian series to Lucasfilm's Kathy Kennedy and Disney and was given the green light. Reminiscent of classic '60s Westerns, like Clint Eastwood's "Man with No Name" movies and the epic Lone Wolf and Cub samurai series, Jon brilliantly created a true Star Wars original. It was to be the first live- action Star Wars series. with stories set in the 'Galaxy Far, Far Away' that all know and love. Jon blended the Western genre's rawness with all of the best qualities from George Lucas' first Star Wars movies. The show achieved a fresh, yet familiar balance with Jon's cool-handed hero, the Mandalorian, adventuring across star systems, allying with, and battling against both newly created characters, and some of the more obscure ones, like the Ugnaught, IG-88 and an Aqualish.