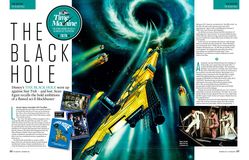 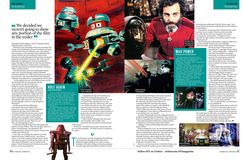 Leicester Square, December 1979. Two films opening opposite each other seem equally destined to lucratively ride the sci-fi wave set in motion by Star Wars. One is the long-awaited first Star Trek film, the other a product of the Walt Disney studio, a byword for success.

Star Trek: The Motion Picture transpires to be a curiously flat affair devoid of the zip of the TV series, while the Disney movie  lives up to its promise of some of the most spectacular visuals ever seen on the big screen. Yet, paradoxically, where Star Trek was the opening instalment of a massive film franchise that continues to this day, Disney’s The Black Hole disappeared into the
folds of history. Within a short span of time, few outside of geekdom remembered it, let alone the fact that it was once considered serious competition to Kirk and co.

The Black Hole started life as a project called Space Probe One, devised for Disney by Bob Barbash and Richard Landau. It had a troubled history of script development, as Jeb Rosebrook found out in February 1977 when he was hired to be “the fifth writer” on the film. He had no SF experience but says of his appointment, “Space Probe was falling down because it didn’t have real character development.”

For all their successes, Disney had little experience of big-budget, live-action movies. It was presumably because of this that they allowed a long, meticulous pre-production process. Rosebrook worked office hours at Disney for a total of 13 months.