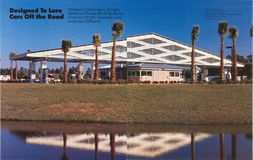 Stripped of giant signs, this gas station of Disney World designed by Hardy Holzman Pfeiffer Associatesacts as its own billboard

Rescuing the gas station from the anonymity of the everyday landscape was the challenge facing Hardy Holzman Pfeiffer Associates (HHPA) when the Disney Development Corporation hired the firm to design an Exxon service station at Disney World. "It forced us to think about something we take for granted," says Hugh Hardy, the principal on the project. And since the client wanted to see four schemes before selecting one, "we had to think about it in four different ways."

Located at the main entrance to the Epcot Hotels complex (where Michael Graves's Dolphin and Swan hotels grab attention), the new gas station serves as a kind of gatehouse to the heavily themed environment just down the road. Competing corporate themes, though, aren't welcome in the Disney universe, so the giant logos sitting atop towering poles and the bright-as-day lighting schemes that oil companies typically use to call attention to their gas stations were ruled out-of-order here. The building would have to be its own billboard, readable from a moving car.

"We wanted something open and transparent, something that would glow at night," explains Hardy. In the scheme Disney selected, the dominant structure is a gabled canopy hovering above eight gas pumps and a 2,000-sq-ft service building. At night, 1OOOW quartz uplights bounce off the underside of the structure's corrugated metal roof, turning the station into a beacon on the flat Florida terrain. "Most buildings are about enclosure," says Hardy. "But this one is open. It's just a porch. I love the simplicity of it."

Seeing the station as a pavilion in a garden, Hardy considered adding plants and vines to the trellised gables. "Maintenance, though, was a problem," he reports. "Getting controlled growth of the greenery would have been almost impossible." The architects had more success introducing green areas around the structure, rather than on it. While gas stations at corner locations usually run parallel to one of the intersecting streets, HHPA decided to angle it between the two streets so it would have a high profile from all directions. And by pulling the station back from the corner, the architects were able to create landscaped areas on all sides. "We didn't want to pave the whole site," notes Hardy.

The layout of the station itself (including turning dimensions and the distance between gas pumps) followed rules set by Exxon. But the architects had some fun with the service building, dressing it up as a "Key Largo hut" with Caribbean colors and hipped roof, says Hardy. The small building has metal louvers over a glass curtain wall, so it can be protected from the Florida sun. A small building with mechanical equipment is just behind the station-closer than Hardy would have liked but necessary for technical reasons.

The schemes for the project that didn't get off HHPA's drawing board ranged from a pumped-up Lego set to a suburban commuter's vision of the Shingle Style to a wavy high-tech design (models and drawing, above right). The one that got built is the most straightforward, says Hardy. "It's probably the one that will look best over time."

For a site about a mile away, Disney hired Venturi Scott Brown & Associates (VSBA) to design another gas station. "We told both firms to be interesting and respond to their sites," says Peter Rummell, chairman of Walt Disney Imagineering, which includes the Disney Development Corp. For a more "urban" location, VSBA designed a building with supergraphics and cut-outs. Given its wooded site, HHPA's trellis scheme seems right, says Rummell. "Neither design would have worked on the other's site."