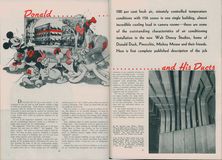 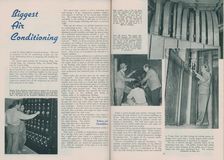 100 per cent fresh air, minutely controlled temperature conditions with 156 zones in one single building, almost incredible cooling load in camera rooms—these are some of the outstanding characteristics of air conditioning installation in the new Walt Disney Studios, home of Donald Duck, Pinocchio, Mickey Mouse and their friends. Here is first complete published description of the job

We suggested, “Then that really puts you on the spot, because you can have no alibis!” He laughed. “No alibis is right. We have no structural fault to hide behind. We have in many instances designed a complete unit for one wing of a building, and, yes, for one room itself where factors were extremely individual.”

You would have to see the studio to grasp the complexity of the problem and to understand the many factors forming the basis of the air conditioning design. The Disney Studios comprise twelve buildings, ranging in height from one to three stories and the buildings stretch across the “lot” which covers fifty-one acres on a knoll in Burbank, Calif., some six miles from the original studio in Hollywood.