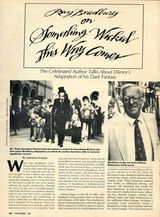 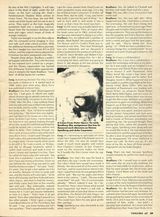 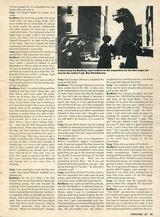 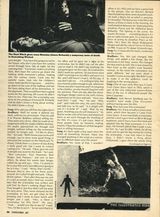 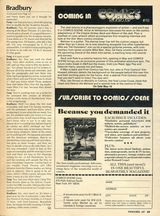 When Ray Bradbury's Something Wicked This Way Comes reaches the screen this Spring, it will mark the end of a 25 year struggle to put it before the cameras. For Bradbury, seeing the film realized is especially satisfying, since it is the first time he has done a script for one of his books, without any studio interference. Through the years he has seen cherished projects continually shift from one studio to another, until in the end they were cancelled as either too expensive, too intellectual, or simply unfilmable. In 1960 there was Bradbury's adaption of The Martian Chronicles that went through several drafts, only to be rejected by M-G-M. In the mid 60's, there was And The Rock Cried Out, written for Sir Carol Reed to direct, but no studio would back it's controversial racial theme. In 1969, there was The Illustrated Man, a clumsy attempt to translate three of Bradbury's short stories to the screen. And then there was Something Wicked This Way Comes, the sinister, yet poetic account of two boys, who discover the evil secret of a traveling carnival. It floundered in Hollywood for years, until it found a suitable home at Walt Disney Studios.

Filming began in the fall of 1981, with Bradbury's hand-picked choice of director, Jack Clayton, at the helm. Then trouble surfaced in post-production, when the special effects sequences failed to please Clayton, who is known for his careful attention to atmosphere and detail in such films as The Innocents and Room At The Top. While the film was in hiatus, Bradbury had the idea for several new scenes, which were not in the original script. These sequences required two weeks of additional filming, and featured 200 tarantulas that invade the boys' bedrooms, as well as new scenes in the carnival's deadly mirror maze. Following this, director Clayton worked with Richard Taylor and Magi Synthavision on the additional effects footage, including a computer scene simulation, which is designed to merge imperceptibly with the live action footage. This scene promises to be one of the film’s highlights. It will take place in the dead of night, under the full moon, as the train carrying Mr. Dark's Pandemonium Shadow Show arrives in Green Town. The two boys, Jim and Will, sneak out of the house and run out to see it arrive. They watch as the train magically transforms itself into a standing carnival. Steam from the locomotive develops into tents and cages, which house all kinds of strange creatures.

Taylor was brought in on the films effects after his computer-scene imaging in Tron met with such wide critical acclaim. With the additional shooting and effects planned, the film's budget has risen from $15 to $19 million, and the original release planned for Christmas has been postponed until May.

Despite these delays, Bradbury couldn't be happier with the film. This is the first time he has enjoyed such control on a project, and the Disney organization has backed him all the way. It seems rather appropriate, since it remains the book Bradbury “loves best" of all the stories he’s written.
[..]