Main Street U.S.A. in Disneyland was Walt Disney's pride and joy ... a window into his life as a young boy growing up in Marceline, Missouri, in the early 1900s.

According to Disney historian Dave Smith, Walt's plan for Disneyland's Main Street "was to present an idealized town at the turn of the [20th] century. Such a town never really existed, but if guests were to conjure up their ideal town, it would be something like Main Street U.S.A."

In the minds of many of Walt's trusted lieutenants, including John Hench, Main Street also was much like the opening scene of a movie, drawing guests into "the show" with the promise that what was ahead, beyond the quaint shops and themed restaurants, were areas "threaded with adventure, romance, thrill and fantasy."

Since Disneyland's opening in 1955, every designer who has been tasked with creating a new Main Street for a new Disney park has had to live up to that first nostalgic thoroughfare, the only one Walt actually had a hand in designing, watched being built and experienced first-hand for more than a decade before his death in 1966.

Imagine, then, being given the daunting assignment of designing a Main Street U.S.A. for a new Disney theme park.

That's what Eddie Sotto was faced with when he was hired by Tony Baxter during the early design phases of Disneyland Paris, which is located in Marne-la-Vallee, France. On April 12, Disneyland Paris celebrated its 25th anniversary.
[...] 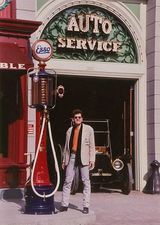