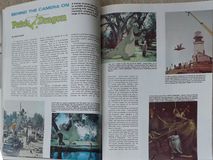 A mechanical shark nicknamed Bruce helped smash all-time box office records with "JAWS". Then "KING KONG" returned from film history and made theatrical turnstiles spin at a dizzying pace. It was only a matter of time until someone else produced a film with an even more imaginative mechanical monster. But who would have guessed it would be Walt Disney Studios with a fire-breathing, now you see him - now you don't - dragon named Elliot?

If audiences accept Elliot as real, "PETE'S DRAGON" will become a classic, predicts veteran cinematographer Frank Phillips, ASC. The musical is situated in a small New England fishing town soon after the turn of the century. In addition to Elliot, it stars Helen Reddy, Jim Dale, Mickey Rooney, Red Buttons and Shelley Winters, along with Hollywood newcomer, young Sean Marshall.

The story begins when Pete (played by young Marshall) escapes from a "mean" family, headed by Shelley Winters, which "bought" him from an orphanage. He flees through the woods, aided and abetted by a pet dragon named Elliot.

In reality, Elliot is a multi-faceted creature. There is a 19-foot-long mechanical Elliot, as well as an animated Elliot. The latter presented a substantial challenge to the cast, director Don Chaffey and Phillips, since animation wasn't started until after the live-action was completed.
[…]

Article via questia (paid)
back issue via ASC store