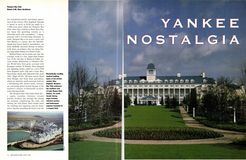 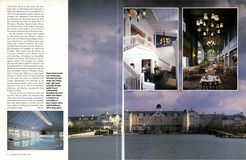 Do Europeans know anything about turn-of-the-century New England? Enough to spend as much as $240 per night in a 1,098-room hotel called the Newport Bay Club, when they could be in Paris? Euro Disney hypes this sprawling creation as "a charming yacht club atmosphere," a megastructure with a 233-foot-long colonnade. In truth, Newport Bay is no more a yacht club than Mickey is a mouse. But the 580,000-square-foot luxury hotel is, nevertheless, one more skillfully executed fantasy by Robert A.M. Stern, an architect who was doing Disney long before Disney ever heard of him. Michael Eisner can be pretty sure that this nostalgic recall of a lost, upper-class-Yankee way of life will play in Marne-la-Vallée, because similar idealizations at Orlando's Disney World have been great successes with European tourists. In Florida, Stern designed two adjoining resorts, styled as a circa-1900 New England yacht club and a Cape May, New Jersey, beach club (Architecture, June 1991, Pages 90-93). All three resorts dwarf their Shingle and Stick Style precedents, which are relatively small structures built for a self-limiting elite. Stern's hotels, however, are convincing period revivals because of the architect's mastery of historically accurate, scale-reducing details. The Newport Bay Club boasts them all – a cupola, countless chimneys, recessed porches, dormers, and awnings. By varying the massing, complicating the roofs, and shifting the wall planes, Stern breaks down the building into segments seen by themselves, thereby concealing the hotel's true size except from the air or from across the manmade lake. A well-landscaped esplanade, a spiffy little lighthouse, and a thoughtfully located Victorian lakeside pavilion balance and complete the composition. Stern admits that his inspiration for this hotel comes not from New England, but from the great hotel on Michigan's Mackinac Island in Lake Huron. Nevertheless, most of the stylistic references, particularly on the interior, can be traced to the nautical and beach life of the East Coast. For the interiors, the Stern team, headed by Alex Lamis and Paul Whalen, collaborated with the Atlanta-based Design Continuum's Hugh Latta and William Post, with whom they worked in Orlando. The Newport Bay Club interiors are lavish. Walls that look like plaster, for example, are constructed of plaster. Stern reports that the French are very good craftsmen, and it shows: woodwork, paneling, and cabinetry are beautifully detailed and finished. The architects and designers worked with singular zest, artfully placing well-chosen nautical, regional, and historical artifacts in all the appropriate spots. Murals for the principal restaurant evoke the style and subject matter of Winslow Homer (boys in straw hats lolling on a rocky beach among the lobster pots). To help Europeans get the point, the rooms are adorned with vintage photographs and drawings of the summer houses, hotels, clubs, boats, docks, and piers of the era, as well as of yachtsmen, fishermen, and families enjoying the New England summer. Among all the lost Americas evoked by the Euro Disney hotels, the Newport Bay Club is the most architecturally successful because Stern knows how to fuel our nostalgia. He is the ideal architect to invent and execute a theme for Disney; he obviously whistles while he works.