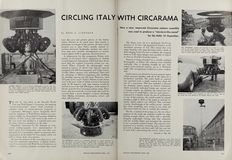 THE HIT OF THE SHOW at the Brussels World Fair was Walt Disney's Circarama, the amazing "movies-in-the-round" system which presented a complete circle of cinema-spectacle projected on a continuous 360-degree screen. Originally developed by engineers of Walt Disney Studios as a permanent exhibit for Disneyland, Circarama delighted millions of Fair visitors who stood in the center of the vast circle and thrilled to a colorful panorama of scenic America unfolding on all sides.

Singularly impressed by this ultimate in wide-screen cinematography were representatives of Italy's giant Fiat Corporation who were then casting about for a spectacular exhibit to represent their organization in the Italia '61 Exposition, which was held in Turin, Italy, last summer.

Because the purpose of the exposition was to celebrate the centennial anniversary of Italian unification, Fiat contracted with Walt Disney Productions to produce a sweeping cinematic spectacle that would trace the past and present glories of the Italian nation. Slanted to be much more than merely a glamorous travelogue of the country, the firm's main purpose was to show Italy's people, natural resources, historical landmarks, modern day inventions and such scientific developments as nuclear reactor plants built to generate electrical power.

In preparation for this assignment, Disney technicians re-designed their equipment to include several important innovations which had been developed since the original Circarama system was conceived. Where formerly the photographic setup utilized a battery of eleven Cine Special cameras equipped with 200-foot magazines and 15mm lenses, Arrifllex 16mm cameras were substituted. These had the advantage of 400-foot magazines, thus doubling the shooting capacity per film load. Moreover, since 12½mm wide-angle Taylor-Hobson-Cooke lenses were to be used (each of which cowered a horizontal angle of 41) degrees) only nine cameras would be needed to cover the full 360-degree circle instead of eleven, as in the first Circarama camera setup. These lenses also increased the vertical angle that could be covered from a given distance – a great advantage when filming mountains, skyscrapers, towers and other tall structures.

[img]MODERN VERSION of the Cinerama photographic unit has nine Arriflex 16mm cameras mounted vertically to shoot straight up into individual front-surfaced mirrors set at 90° angle and cover a full 360° field of view. In foreground is controlbox through which cameras may be operated from remote position.[/img]

[img]THE CIRCARAMA cameras are sometimes operated in reverse position – i.e. with the whole unit upside-down, as shown here. To shoot scenes for the Fiat production described by author, the unit was suspended from a giant crane in the position pictured, and elevated to a considerable height for a breathtaking panoramic view of shipyards in Genoa, Italy.[/img]
[…]