In the world of Cars, there are no humans. The athletes are race cars, built for speed. To them, shaving seconds off their racing time means everything. That's the way it is for Lightning McQueen, the hotshot Piston Cup racer with an obsession to win — but at what cost?

The idea began with John Lasseter, the film's writer-director, who revolutionized the animation industry with CG features, beginning with Toy Story. An avid car buff who claims to have Disney blood in one vein and motor oil in the other, Lasseter yearned to make an animated film starring automobiles. He started talking about it with Pixar's Joe Ranft in 1998. They viewed a documentary, Divided Highways — which examines how interstate highways affect the small towns that are bypassed — and began researching Route 66.

Then, in summer 2000, Lasseter took his wife Nancy and their five sons on a two-month coast-to-coast vacation. Working long, hard hours directing Pixar's first three films had exhausted him, and the road trip brought him closer to his family. Lasseter realized there was more to life than living in the fast lane, and that the country offered increasing diversity beyond the interstate. With his batteries recharged, he returned to work with the spark of his next feature, which was provisionally titled Route 66, but is now Cars.
[…] 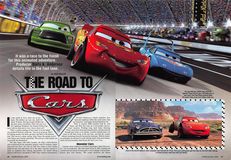