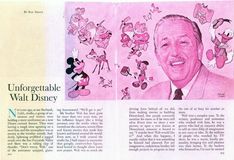 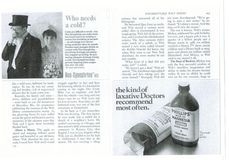 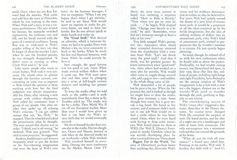 Not long ago, at our Burbank, Calif., studio, a group of animators and writers were holding a story conference on a new Disney cartoon feature. They were having a tough time agreeing on a story line, and the atmosphere was as stormy as the weather outside. Suddenly, lightning scribbled a jagged streak over the San Fernando Valley and there was a rolling clap of thunder. "Don't worry, Walt." one of the animators quipped, glancing heavenward. "We'll get it yet."

My brother Walt has been gone for more than two years now, yet his influence lingers like a living presence over the studio where he turned out the cartoons, nature films and feature movies that made him known and loved around the world. Even now, as I walk around the studio lot, I half expect to encounter that gangly, country-boy figure, head owed in thought about some new project. Walt was so much the driving force behind all we did, from making movies to building Disneyland, that people constantly mention his name as if he were still alive. Every time we show a new picture, or open a new feature at Disneyland, someone is bound to say, "I wonder how Walt would like it?" And when this happens, I usually realize that it was something he himself had planned. For my imaginative, industrious brother left enough projects in progress to keep the rest of us busy another another 20 years.

Walt was a complex man. To the writers, producers and animators who worked with him, he was a genius who had an uncanny ability to add an extra fillip of imagination to any story or idea. To the millions of people who watched his TV show, he was a warm, kindly personality, bringing fun and pleasure into their homes. To the bankers who financed us, I'm sure he seemed like a wild man, hell-bent for bankruptcy. To me, he was my amazing kid brother, full of impractical dreams that he made come true.

Recently, his family and mine – wifes, children and grandchildren – went vack to our old hometown of Marceline. Mo., for ceremonies celebrating the issuance of the Walt Disney commemorative stamp. As the gleaming Santa Fe train rolled across the green midwestern prairie, memories of the pleasant years that Walt and I spent there inevitably flooded back.
[…]