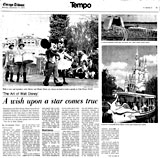 This article series promoted the book The Art of Walt Disney: From Mickey Mouse to the Magic Kingdoms and Beyond written by Christopher Finch which was first published in 1973.

Disneyland and Walt Disney World have left an indelible impression on present day America. Conceived in the final years of Walt Disney's productive career, Christopher Finch describes the genesis of these two remarkable complexes in the first of a four-part series from his book "The Art of Wall Disney."

Disneyland was opened July 17, 1955. Television crews were on hand to record the opening ceremonies, and 30,000 guests thronged Main Street and explored the farthest reaches of the complex. Millions more saw the opening on their home screens. No entertainment facility had ever enjoyed this kind of publicity, and Disneyland became a national phenomenon overnight. Crowds came flocking the gates – more than a million between July 18 and Sept. 30, and almost 4 million during the first complete fiscal year.

Disneyland grew from an idea that had been maturing in Walt Disney's bead for l5 or 20 years before it became a physical reality. When his daughters were young, he would take them to local amusement parks and playgrounds, and he said later that those often unsatisfying visits triggered the notion that a park could be devised which would be as entertaining for adults as for their children.

There is some evidence to suggest that he was thinking about specific rides as early as the late '30s, but the heavy investments he had made in the Burbank studio and the major feature films of the period precluded any possibility of seriously developing the park idea then.

In 1952, Disney set up an organization called WED [the initials of his own name] to begin planning the park in earnest. WED consisted, at first, of a handful of designers, mostly co-opted from the Disney animation department. They were men who understood how Disney worked and they were well equipped to interpret his ideas.
[…]