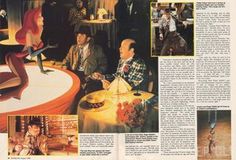 "I'm a cartoon nut! I love cartoons," says Bob Hoskins. "All of them. I find the whole art of cartooning — toons — fascinating. I think they're wonderful."

This was a useful attribute when director Bob (Back to the Future) Zemeckis was casting the lead role of private eye Eddie Valiant in Who Framed Roger Rabbit? But Hoskins, the 45-year-old star of Mona Lisa, The Long Good Friday and The Cotton Club, was also chosen for other reasons. "At one point, they realized they had to have someone who was a bit cartoonish," he says, "who looked as if he could bounce off the walls the same as the cartoons. Little did I realize that that's actually what they intended — to bounce me off the walls. I think they came to the conclusion that I was the most cartoonish person they could think of."

The live actors in Roger Rabbit (STARLOG #132) were filmed before any of the animation. "This was tough because I saw Mary Poppins, Song of the South, Anchors Away, Bedknobs and Broomsticks, all of them," Hoskins explains, "and they never worked. They just looked like animation and real life, and basically there's no relationship. And I thought, 'Oh hell, what have I done? I've got myself into a terrible state here, and taken on an impossible job, and it can't be done.'

"And then I watched my daughter, Rosa, she was three at the time, and she has all these invisible friends whom she talks to — Geoffrey and Elliott. And I realized that, as we get older, our imagination goes further and further to the back of our head. When we're a kid, we can actually take it out and look at it. I mean, we can see it. As we get older [still], senility comes in, and the imagination comes to the forefront again, and takes over.

"So, I just concentrated on an immature imagination — forcing it back to the front so I could actually take it out and look at it. And I managed to actually see them, which was all right, but you do it for 16 hours a day for five months . . . ! I started to lose control and hallucinate in all kinds of embarrassing places. Some of it's quite rude, but there's not much you can talk about. At one point, it was quite frightening, weasels and all sorts of things turning up."
[…]