Morgan and Chelsea have the incredible opportunity to interview legendary voice actor, Bill Farmer. Bill is most notably known for being the voice of Goofy for the past 25 years, but he also has voiced numerous other famous cartoon characters such as Horace Horsecollar, Yosemite Sam, Foghorn, Slyvester the Cat and lots of other crazy voices along the way.
Highlights:■ What has Bill been up to recently?■ All about Goofy’s yell■ Other voices he has done: Horace Horscollar, Pluto, Foghorn, Yosemite Sam, Sylvester, Bugs, Daffy, Robot Chicken, Sam & Max Hit the Road & lots of incidental voices■ The day in the life of Bill Farmer■ Working with other voice actors or solo?■ Favorite recording experiences■ How grueling is voice acting on one's voice?■ His thoughts on replacing voice actors■ What advice does he have for future voice actors?■ Does he ever get star struck?■ Restrictions on using the Goofy voice■ What was his first recording gig like?■ Goof Troop and A Goofy Movie memories■ What would he like to see Disney do with Goofy next?■ Has he ever had the chance to dress up like Goofy?■ Favorite Goofy cartoon?■ Thoughts on his Disney Legend award■ Making documentaries, photography■ Dawes Butler as his mentor■ Make-A-Wish Foundation ■ His company ToonHouse Inc: voice coaching, demos, etc.■ What’s in Bill’s future?
[....] 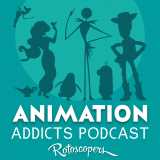