This is a very special edition of the WDW Radio Show for a number of reasons. First, the content of this week's show will be a little different, as there won’t be any news or rumors this week, partially 25th anniversary of Epcot, and I am going down to participate in Celebration 25, the two-day event special guest. I am thrilled to be able to share with you my exclusive one-on-one interview with Jim MacPhee, Vice President of Epcot, and person who obviously has played an incredibly important part in the events, as well as recent changes to Epcot.

In recent episodes of the show we took a very detailed look at the Journey Into Imagination pavilion and attraction, and former Disney Imagineer Steve Kirk joined me to talk at great lengths about two of his creations, and hosts of the pavilion - Dreamfinder and Figment. Many of you wrote and called in and let me know how much you enjoyed those segments, and how they brought back such fond memories, and in fact, they even sparked the imagination of Ron Schneider, the man who not only gave the Dreamfinder his voice in part of the attraction, but was the very first walk around character in EPCOT Center. He will join me to talk about his memories of Dreamfinder, share stories about his creation, share some secrets and so much more. 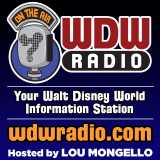