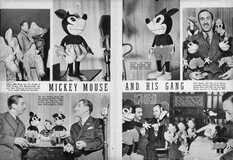 [img]Walt Disney, with four of his famous characters, Mickey and Minnie Mouse, Donald Duck, and Pluto the sad hound. Disney was born in Chicago in 1901.[/img]

[img]Orchestra Leader Felix Mills; with Disney and his perennially popular Mouse and Duck. who have gained friends Every country.[/img]