From composing the score for Illuminations: Reflections of Earth, the renowned Epcot spectacular that played for two decades, to conducting popular films like Mary Poppins Returns and Captain America: Civil War, the reach and influence of Gavin Greenaway is profound. For three decades he has conducted or composed scores for film, television and theme park projects. He is currently conducting The World of Hans Zimmer live tour, which has performances around the world.

On this episode of Notably Disney, Gavin joins Brett Nachman to discuss his storied career, from working with John Powell and Hans Zimmer, to creating his timeless score for Illuminations, for which he won an Emmy (via its use during ABC News' Millennium coverage). Gavin lends keen insights about the process of serving as a conductor in Hollywood and collaborating with fellow iconic musicians, as well as developing original pieces. 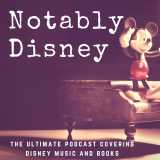