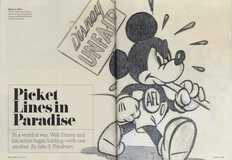 THE STRIKE WAS in its third week. Picketers had plans to bombard non-striking colleagues at the front gate right at quitting time, 5:30 p.m. on Friday, June 13, 1941. But before that confrontation could be joined, the boss led loyalists off the company grounds to a nearby high school, where he held an impromptu meeting. By the time 400 picketers, waving placards and signs, realized what was up and raced to the school, most of the scabs had left. Except for a handful of allies, only the boss himself remained, sitting in his car and tipping his hat at the strikers in the style of President Roosevelt. Out of the crowd rushed the tall, steely-eyed strike leader. Art Babbitt shouted at his boss and former pal, “Walt Disney, you ought to be ashamed of yourself!” Disney scrambled from the vehicle, fists clenched, calling Babbitt a dirty sonofabitch. The crowd came between them, half booing, half cheering.