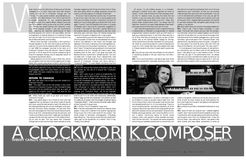 Wendy Carlos bears the distinction of being one of the few composers ever to work more than once with director Stanley Kubrick (on A Clockwork Orange and The Shining). She also scored another groundbreaking science fiction film, Walt Disney's Tron, which was the first big-budget production to use computer-generated imagery for most of its special effects. Wendy Carlos also used to be Walter Carlos at one time, but that’s another story. Wendy was experimenting with electronic music long before anybody thought it was cool (Switched-on Bach, featuring her electronic performances of Bach favorites became a hit record in the late 1960s), and her arrangements of classical pieces for A Clockwork Orange lent just the right mix of ironic futurism to Kubrick's icy tale of dehumanization and brutality.

While Carlos has kept a low-profile in film scoring in the past decade or so, her work with Kubrick and her pioneering Tron score remain essential efforts for genre fans. In late 1998 the composer returned to her work on A Clockwork Orange in two new albums: Tales of Heaven and Hell, a riff on some of the musical underpinnings of Kubrick's dystopian fantasy, and an expanded version of the original soundtrack album.

Wendy spoke to us from her studio in New York, and as you can gather from the ratio of interrogative text to reply below, she’s a pretty easy person to talk to. Not only is she highly adept at discussing the technical issues inherent in her primarily electronic music, but it turns out she’s as knowledgeable about film score history as the average FSM reader. […]

JB: How did you get involved in Tron?

WC: Disney’s project was being put together under the auspices of some animators from Boston who had originally done the Animal Olympics, which got lost on the public when we backed out of the Russian Olympic Games in 1980. The people there induded somebody who was close to the director and who knew my music, and they approached me to do the subterranean world inside the computer. And I told them that honestly I wasn’t interested in doing just electronic music, that I would like to hybrid the whole score with orchestra. They said, “Oh, you can write for orchestra too?” I bristled slightly and said sure, what do you think my training is?

So it was kind of like an etude, a study piece for me, and it turned out to be tightly specified by then—there wasn't a lot of elbow room, and that made it fun. It was a chance to work with a big orchestra and a fairly big electronic ensemble and wed the two together before synths had gotten to the stage where they could be used in the same room with the orchestra, being played along with, like the way Jerry Goldsmith and a lot of others do now. This was before the DX-7 was out, when it was still a clumsy device to have there; it was unpredictable and unstable, so we did it in the studio.