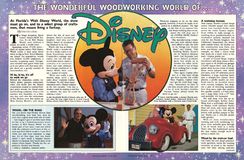 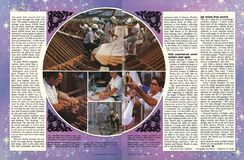 At Florida’s Walt Disney World, the show must go on, and to a select group of craftsmen, that means living a fantasy.

Sprawling across 27,000 acres—that’s 43 square miles—Walt Disney World covers a land mass about twice as big as New York’s Manhattan Island. For population, would you believe 31,000 employees, a number surpassing many Chicago-area suburbs? And, guess what? Just as in any place with that many people, there are a goodly number of woodworkers, too.

Behind the characters, castles, exhibits, glitter, parades, restaurants, rides, and thrills that the Disney corporation created in central Florida’s piney woods, we found some hardworking craftsmen. Even a hot summer sun, humidity, or a blustery day can’t dim the enthusiasm of the 40-man crew that makes up Walt Disney World’s mill shop.

Above the din of saws and shapers, there’s occasional laughter. And why not? The Disney brand of woodworking happens to be fun.

Where else but at Disney World could a woodworker—in a week—carve a car from Styrofoam, mend Cinderella’s carriage and castle, cut out 300 plywood palm leaves, repair a century-old carousel horse, and craft cabinetry for a foreign exhibition? At Disney World, these tasks are a matter of course.