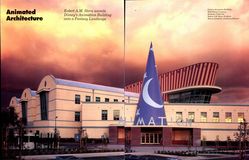 Robert A.M. Stern remembers growing up watching Disney cartoons, “which always took place in some fantastic city of the future.” As a grown man with a large office, “I finally got to build that vision.” His excuse was the Disney Corporation’s need to house their highly successful animation department in bigger quarters “on campus” in Burbank, California. The 243,000-square-foot Animation Building now houses well over 500 animators and administrators who are busy turning out successors to Beauty and the Beast, The Little Mermaid, The Lion King, and this summer’s Pocahontas.

The need to make some Disney Magic allowed Stern to create forms that depart from the more classicized language for which he has become famous. Like his 1989 Mexx Building in the Netherlands, the Animation Building combines the exuberant celebration of the freedom that modern technology gives designers. Integrating technology with consumer fantasies, the building arrests the senses while accommodating rational functions.

“Too bad you can’t see the building from the freeway,” Disney chairman Michael Eisner says, referring ironically to its fantastic facade, which in fact faces one of the busiest thoroughfares in California. The Animation Building is an abstract, sweeping billboard, complete with giant letters that spell out its name. Stern colored its corrugated metal facade with whimsical shades of red and pink, and capped the  composition with a six-story replica of the sorcerer’s hat Mickey Mouse wears in Fantasia. The Animation Building levitates from the site into fantasy.

Yet the structure is not what Robert Venturi would call a “building-board.” Behind the sound-baffling facade that has already become such a local landmark that helicopters use it to locate problems on the freeway, there stands a row of stucco-clad vaulted bays where the serious animation work occurs. These may be cartoon versions of Peter Behrens’s 1909 AEG Turbine Factory, an early Modern industrial icon, or possibly even Disney’s own early studio buildings.

Behind these walls lie the acres of “cheap space” where the actual work goes on, and it is here the architect has worked his true magic. “I told Stern to make this space look like his own office: a big loft,” comments Eisner, adding that he sees an analogy between the “backstage” production of films, and the studios where architects work.