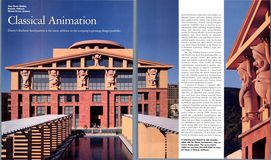 Disney’s Burbank headquarters is the latest addition to the company’s growing design portfolio.

Yes, this building features seven 19-foot-tall dwarfs, cast from thin-shell glass fiber reinforced concrete (GFRC). But unlike the swan and dolphin sculptures that adorn the architect's hotels, these dwarfs are fitting contemporary counterparts to ancient caryatids – they appear to support a pediment, giving at least the illusion of a functional purpose. And while the barrel-vaulted roofs over the 330,000-square-foot headquarters' most prominent corner vaguely resemble film reels or a certain mouse's ears, Graves claims he had no such symbolism in mind.

"I wanted to design a corporate office building for a serious company engaged in entertainment," he says. "It happens, of course, that they are identified with cartoon characters, and that's how Disney started. 'Snow White and the Seven Dwarfs' was their first full-length animated feature, so the dwarfs seemed an appropriate symbol for both the company's beginning and the new beginning with Michael Eisner and the new board."