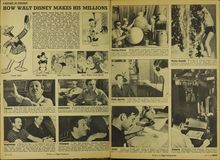 MICKEY MOUSE, Donald Duck, Pluto the Pup, stars of shorts, now play second fiddle in business of their creator. “Snow White” and “Pinocchio” have put Walt Disney into business of big features. “Snow White's” gross earnings for Disney in 1938 and 1939, £A1,461,516, raised his 1939 net profit to £390,634. Few weeks ago shares in Walt Disney Productions were issued to raise 3,875,000 dollars (about £ A 1,204,687) new capital. This will pay off Disney’s new studio at Burbank, California, and provide working money for four feature cartoons now in production – “Bambi,” “Wind in the Willows,” “Peter Pan,” “Fantasia.” Invention of animated cartoons is credited to Emile Cohl, aged Frenchman. He was reported some years ago as living on public charity. Time was when Australian-created Felix the Cat and early Mickey Mouse were simple pen-and-ink creatures, who turned themselves into aeroplanes or submarines and otherwise defied the laws of gravity, logic and good sense. In to-day’s cartoons, reason has its place with humor, emotion, suspense. String of “gags” gave place to story when “Three Little Pigs” pictured theme of good winning over evil, and thrift earning its reward. Cartoon took to sound and color as an actor takes to applause. Cartooning is most intricate and complex avenue of film production. PIX shows some of work at Disney studio.

Gesture Walter Elias Disney, 38, as these pictures show, gestures expressively at story conferences, where he is sometimes outvoted. For nearly 12 years Disney has not drawn his own cartoons. To do so, he would need 1200 pairs of hands. He pays those hands to serve his brain.

Conference Into Cartoon Short go some 15,000 drawings, and seven or eight times that number into a feature-length cartoon. From sleepless night on train in 1928, when he thought up Mickey Mouse to succeed Oswald Rabbit, Disney has kept a hobgoblin’s leap ahead of competitors.

Beginnings In Kansas City, where he was commercial artist, in 1920 Disney made his first cartoons, shown in three theatres. Two years later, he and other local cartoonists put on paper several fairy tales. Venture collapsed. In 1923, Disney took £8 to Hollywood, where brother Roy had job and £50. They borrowed £100 from uncle, and in partnership produced Oswald shorts. Roy remains partner, business manager.

Triumphs A Hard Row -— artistically, technically, financially —- did Disney plough until “Snow White.” A rival said: “We’re businessmen. Disney is more of a Rembrandt.” Artistry and social significance read into Disney cartoons leave Disney puzzled. When Aldous Huxley questioned him, Disney said: “Heck, Doc., we just try to make a good picture; then the scholars and professors come along and tell us what we ve done."

Making Noises Wearing Goggles to protect eyes against accident, these men roll bladders containing buckshot to simulate certain sound. Sound effects department is required to produce every noise known or imagined to create realism or fantasy. Men are musicians since sounds are recorded from a score to ensure synchronisation with animation and music when sound and pictures are joined.

Water Sounds Every Real Or Unknown Sound of water is created in this tank, with devices dreamed up by sound effects men. For Monstro the Whale’s sounds in “Pinocchio,” plunger thrust into soap-sups produced appropriate effects.

Artist Animator At Drawing Board working on character of Stromboli, the puppet-master in “Pinocchio.” On desk is plaster model of character. Made by character model department, figures are models for artists’ drawings.

Camera Photographing Artists’ Drawings. Above operator is three-dimensional camera invented at Disney studios to give height, width, depth. He photographs the cartoon drawings.