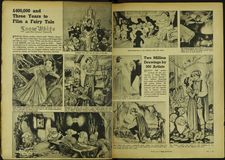 FROM the Disney studios, which made "Mickey Mouse" and "The Three Little Pigs," has come a full-length fairy tale film in color — "Snow White and the Seven Dwarfs." It cost £400.000 and took three years to make. Adults acclaimed it as its Amercian and European premieres. But the frightening eeriness of witch’s cavern scenes was not considered fit fare for English children, unless accompanied by adults, the British Home Secretary decreed.

[img]Snow White, released by the compassionate huntsman, who was to kill her, and take her heart in a box back to the wicked stepmother, runs away and is lost in the wood.[/img]

[img]Rescued by animals, she is taken to the dwarfs’ house, and decides that the places should be cleaned up. Below: The Dwarfs, Doc, Happy, Sneezy, Dopey, Bashful, Grumpy and Sleepy, are cleaned up, too.[/img]

[img]The Wicked Queen, Snow White’s stepmother, learns of all this in her magic mirror. Something must be done about it.[/img]

[img]Disguised As A Witch, the wicked Queen brings Snow White a poisoned apple.[/img]

Nearly 500 people worked on the production of "Snow White and the Seven Dwarfs." Two million drawings were made on celluloid by 300 artists before the 250,000 perfect ones were selected, and the ingredients of humor, drama, pathos and romance were mixed to make 80 minutes of entertainment.

[img]Snow White falls under a death-like spell. Sadly, the dwarfs place her in a crystal and gold coffin in the wood, where she is found by the Prince, who breaks the spell with a kiss.[/img]

[img]The Prince, carries her away to the wedding at his castle ... And they all live happily ever after.[/img]