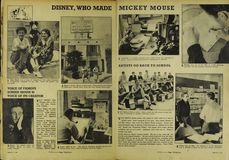 Original of Mickey was mouse which frolicked round waste-paper basket in Disney's work-room years ago in Kansas City. First, Disney called his pet Mortimer, thought name effeminate, changed it to Mickey.

WALT DISNEY Studio began with capital of £160— £100 of it lent by artist's uncle. Staff consisted of two girls. One, Lillian Bounds, is now Mrs. Disney. She wrote first Mickey Mouse scenario. Disney completed herculean task of making 11,000 drawings on celluloid all by himself. Result was "Steamboat Willie,' with quaint little mouse playing xylophone solo on cow's teeth. Audiences went wild over it. Disney's fortune was made.

To-day, however, Disney remains modest. His car is four years old. He lives in a six-roomed bungalow. He has netted £2,000,000 from his films. Royalties paid for use of his characters in advertising, branding goods are said to amount to £7,000,000. Yet Disney allows himself salary of £50 a week, puts almost all his huge profits back into creation of new color cartoons, like newest sensational full-length feature, "Snow White and the Three Dwarfs."

[img]1 Walt Disney has a corps of "animators" who make thousands of drawings necessary for one film. These are studio's only two girls.[/img]

[img]3 Disney. On screen, voice of Mickey Mouse is voice of Disney himself.[/img]

[img]4 Disney artist on job. This man is sketching general lay-out of a cartoon scene, from verbal description given by Disney.[/img]

[img]7 Art Class at Disney studio. Once a week the 350 artists attend life-class in drawing, as  regular "refresher course."[/img]

[img]8 Disney has an idea. He explains it to the lieutenant, and so £80,000 is spent on one more Disney production.[/img]