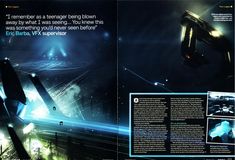 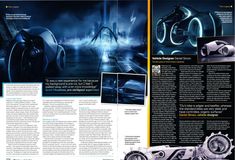 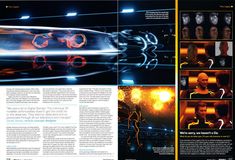 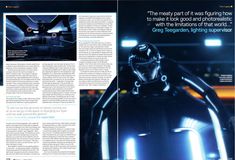 Almost three decades have passed since Tron dazzled us with its glowing, computer-generated landscape. And now Tron: Legacy promises to send us to the other side of the screen once more, into a digital realm where programs control the world and death arrives in a flash of electrons. With the majority of work handled, aptly, by effects house Digital Domain (DD), 1,500 shots were completed over a two-year period, in contrast to the three-and-a-half-months of principal photography. Roughly 85 per cent of the film is CG, with live-action  photography complemented by fully digital environments, characters and vehicles.

In the first movie, the abstract visuals were in keeping with the early days of computer graphics. But as Legacy's VFX supervisor and Oscar-winner Eric Barba explains, “Those renders were prohibited by the technology of the day. Now that technology has been around for 28 years and is much more sophisticated." This latest vision of the Tron world lives on a separate server totally isolated from the internet. “It's a Galapagos island evolving over time," says Barba. “The simulation has become more complex and real, full of atmosphere and physical rules that didn't apply in the first film. It's also a much more dangerous world than the original. Clu [2.0] has taken over the world and is now running things."

DD pre-vized the entire film in stereo before it was shot under the guidance of pre-viz and layout supervisor Scott Meadows. This was Meadows' first foray into stereo pre-viz: "We joke about it now - that if we had to do a flat movie it would be so much easier it would be a joke. But it wasn't that bad. It was familiarising yourself with what the terminology and values meant, what to look out for at the workstation and when you saw it on the big screen, and how they translate to the shot. But once you got comfortable with that, it was actually fairly straightforward."