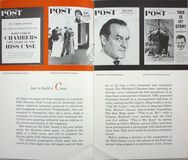 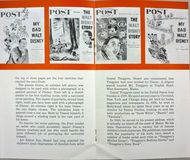 On these two pages are four examples of a periodic POST dilemma. POST covers are an American institution – admired, imitated, preserved in collections and recognized everywhere. Traditionally, they are complete in themselves; they tell a story, make a comment, or record some scene from American life. A POST cover painting ordinarily has no relation to the stories and articles in the magazine.

But whenever the POST breaks a big new article series, the dilemma arises again – to preserve the spirit of a POST cover, and still to acquaint the buying public with what's going on inside.

Before making a decision on the composition of the Walt Disney cover, the editors of the POST had several ideas prepared in preliminary form. Across the top of these pages are the four sketches that reached the semi-finals.

The parade theme, at extreme left above, was designed to be used with either a photograph or a painted portrait of Disney. Next left is a sketch similar to the first Godfrey cover, with a narrowed cover painting. The cluster of portraits, second from right, could also have been used with a photograph of Disney. At extreme right is the train theme – the one finally chosen. The miniature train is painted from a real one. Built by Disney himself, it chugs around a winding track in the vast yard of his home.

To execute the cover painting, the POST needed an artist who could accurately depict Disney’s famous creations and one who could handle the quite different job of portraying the cartoonist himself.

Gustaf Tenggren came to the United States from Sweden in 1920. He spent several years in Cleveland, New York and Chicago doing art work for books, magazines and newspapers. In 1936, he went to Hollywood where he spent three years as an art director for Disney Studios, working on such historic productions as “Snow White”, “Bambi” and Fantasia".

In 1943, he moved to his present address, which is actually an island off the coast of Maine. He has done illustrations for a nursery full of famous children's book characters. His publishers, impressed with the popularity of his work, have issued a number of books under such titles as "Tenggren’s Mother Goose”, “Tenggren’s Bedtime Stories” and “Tenggren's Story Book”.

The sketch finally selected was sent to Mr. Tenggren with the request that he make sure to work in at least all the major Disney creations – Mickey Mouse, Donald Duck, Pluto and so on. When the artist sent in his first sketch for approval (at top). Ken Stuart was delighted and returned it with the remark. “You seem to have included everyone but Jiminy Cricket." Later Jiminy turned up, too, in the lower left hand corner of the finished cover below.