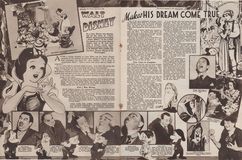 As a boy, Disney was fascinated by the story of "Snow White." He dreamed of bringing "Snow White" to the screen. He passed on his great idea to others, only to be told that such a dream could never become successful reality. But, as R. EWART WILLIAMS tells you here, Disney refused to be discouraged.

AFTER a private showing of Snow White and the Seven Dwarfs, members of the audience formed little groups to discuss the film. And everywhere one heard the same remark: " Is it going to revolutionize films? Does it mean that actors will no longer be necessary? "

To my mind, that is a fantastic point of view. It is rather like saying that labour-saving devices in the home mean the end of the housewife.

But as I listened, my mind went back nearly three years to the day when Walt Disney arrived in London for a holiday. A big crowd was at the station to greet him, and later in the day a party was held in his honour. And many of the people who attended the private showing of Snow White were guests at that party.

Disney was surrounded by a crowd who asked him many questions, and told him how they would make his cartoon films if they were in his shoes. The genius who had created Mickey Mouse and the Silly Symphonies listened politely. Then he outlined his plans for Snow White, admitting that he was feeling nervous about the possibility of its success.

Glad I Was Wrong

HIS audience listened with appropriate enthusiasm, but when he had gone they declared he was mad to attempt a full-length cartoon film. I know—because I was one of them. I did not believe it was possible for a cartoon to hold an audience's attention for an hour and 20 minutes. Having seen Snow White I am glad I was wrong.

Once again Disney has shown that he is the logical successor to Hans Andersen and the Grimm Brothers. He alone is creating worthy fairy stories which delight children by their cleverness, and adults by their artistry.