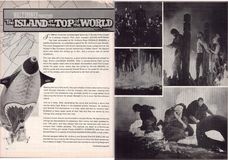 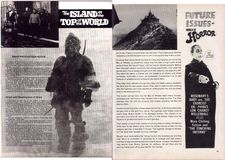 "The Island At The Top Of The World" is high adventure in the Jules Verne Tradition, a saga of excitement, danger and suspense about four polar explorers who discover a lost land inhabited by Vikings.

A rich Englishman, an American archaeologist, a French aeronaut and an Eskimo guide are the unlikely quartet who, in 1908, fly into the Arctic wilderness in search of the Englishman's missing son. They find much more than they bargained for when storm carries them to a mysterious, time-forgotten island at the top of the world.

Photographed on various locations beyond the Arctic Circle and at Walt Diasey Studios in Burbank, Calif., the multi-million dollar film is produced by Winston Hibler and directed by Robert Stevenson with an international cast […]

Origin and Development of Story

"The Island At The Top Of The World" is based on Ian Cameron's noxel, "The Lost Ones", which the studio bought in 1968. The following year producer VVinston Hibler began shaping it for the screen. Principal photography commenced in 1973.

"We did exhaustive research in history, archaeology and anthropology," Hibler says.

"We were aiming for a super-real fantasy adventure in which the Viking colony and their island at tha Norh Pole would be entirely credible."

Research disclosed that during Eric the Red's second expedition to Greenland in the 11th Century, 30 boats were lost at sea. There is an historical possibility that they could have been carried to an island such as Hibler's film depicts. And the idea of an island warmed by volcanic heat is feasible. Island is volcanic.

“We filmed some location scenes in Norway, using members at a rowing club as the Vikings who row the longships." Hibler goes on to say. "Nature photographers roamed the arctic, shooting polar bear, musk ox, seals, reindeer and caribou in their natural habitat. They also filmed icebergs and the vastness of the icepack itself for scenic beauty.

"We cast the picture with relatively unfamiliar players. And the characters speak in their own language. Dialogue was translated into ancient Norse, Eskimo and French.