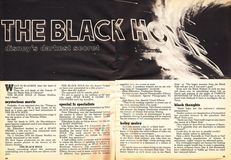 WHAT IS BLACKER than the heart of Blacula?
Than the evil deeds of the Unholy 3?
Than the Black Hole of Calcutta?
THE BLACK HOLE of Disney Studios, that's what!

Probably, if you searched thru the "Things to Come" features in FM in back issues, as far back as 4 years ago you'd find intimations of THE BLACK HOLE.
At first untitled, in the preproduction stage it was the project of one Winston Hibler.
He died.
After his death in 1976, the film-without-a-name became orphaned until it was adopted by a Peter Ellenshaw.

Mr. Ellenshaw decided to call it SPACE PROBE, a title you've seen mentioned more than once in past numbers.

On 11 October 1978 the Disney Studios excitedly announced to the world:

We have begun production on the most ambitious motion picture in the history of the Disney Studios:
THE BLACK HOLE

Nearly everything about this mammoth undertaking sets it apart from our efforts of the past.

THE BLACK HOLE has the largest budget we have ever committed to a film project – More than $17 million!
The approach will be strictly adult.
We aim to appeal to the millions of SF fans who made STAR WARS & CLOSE ENCOUNTERS such big boxoffice.

The crew of cinemagicians assembled for THE BLACK HOLE is mind-boggling.

Peter Ellenshaw was the mastermind behind the mattes & effects for the beloved Disney filmization of Jules Verne's classic 20.000 LEAGUES UNDER THE SEA.

Ellenshaw is also an Oscar winner, for the sfx on MARY POPPINS.

Like father like son, P.S. Ellenshaw, the offspring of his famous pop, is heading up the unit handling the matte work for THE BLACK HOLE. The work should be in capable hands – "PS" handled the mattes for STAR WARS! Any questions?

A half million dollar computer will be utilized to create the illusion of speeding thru space as seen in such productions as STAR WARS & Battlestar Galactica. The computer camera system is known as ACES (Automated Camera Effects System) and in some scenes as many as 12 different foto processes will be melded together onto the screen at once.

"They're all working together to create one of the most exciting films ever made."

Gary Nelson is directing. This Emmy nominee will oversee the longest production schedule in the history of Disney live-action filming.

"Nearly 14 months of simultaneous & post-production filming & processing will be required for the creation of this amazing screen venture."
[…]