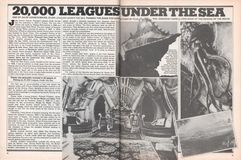 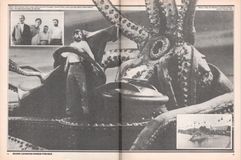 Jules Verne's Twenty Thousand Leagues Under the Sea was first published in 1870 in France. The first film version was made by Wallace McCutcheon in 1904 and featured serial queen Pearl White. The early master of fantastic cinema, George Melies unveiled his version in 1907. In 1916, Hollywood offered an alternative version Verne's story written and directed by Stuart Paton. This successful filming of the story was also burlesqued by Hollywood with a cartoon made by Paul Terry, called Twenty Thousand Feats Under the Sea (1917). Another animated short, Twenty Thousand Legs Under the Sea (1918), featured the Katzenjammer Kids. In 1952, Czech animator/director Karel Zeman included elements of the story in his French production, Les Voyages Extraordinaires de Jules Verne. Many later feature films (as well as a 1951 serial version of Mysterious Island) would also feature the Captain Nemo character: Mysterious Island (1960, which featured the stop motion animation work of Ray Harryhausen). The Stolen Airship (1969, directed by Karel Zeman), Captain Nemo and the Underwater City (1969) and The Amazing Captain Nemo (1975).

When the Walt Disney studio decided to film Verne's novel in 1954, it was an attempt to break away from the animated features and true life animal documentaries that the studio was best known for. It should also be remembered that the 1950s science fiction boom was in full swing at the time and the studio saw in the Verne novel a ready-made premise on which to base a big budget science fantasy feature.

The film was in pre-production a full year before the cameras rolled, with Disney himself personally involved in all aspects of the filming. Wisely deciding to shoot much of the film on location and underwater Disney was able to utilise much of the knowledge he had gained during the filming of his documentaries.

Disney chose a young director, Richard Fleischer, whose previous credits included The Narrow Margin and Happy Time and who had won an Academy Award in 1948 for a documentary he had co-produced, Design for Death. Fleischer would later direct another science fiction film in 1967, Fantastic Voyage, which also dealt with a submarine journey though in that film the locale would be the interior of the human body.

Following a long period of location scouting, the film went before the cameras in January 1954 in the Bahamas, near the resort town of Nassau. The location had been chosen for its particularly clear, warm water and the exotic ocean life that abounded in the area. However, before filming could begin on the nine million dollar production, many obstacles had to be overcome. As much of the film was to be shot underwater, it was necessary to encase the standard Mitchell cameras in water-tight containers.