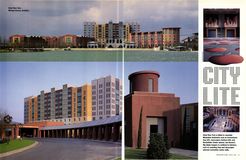 When Michael Eisner wished upon Michael Graves's particular star, his dream for Hotel New York failed to come true. What Eisner asked Graves to do, Robert Stern could have done in his sleep. All the boss wanted, after all, was a 574-room luxury convention hotel with 6,600 square feet of convention facilities that would evoke a slice of the Big Apple by suggesting skyscrapers, brownstones, and Rockefeller Center. What Eisner got from Graves instead is a stripped-down collage of the architect's favorite Italianate volumes, with nary a remote hint of the hoped-for Manhattan significations. The most laughable failure is RockefelIer plaza, which is nothing more than a flat rectangular plane decorated with a map of Manhattan and flanked by a pair of ugly little pavilions. The five-story stuccoed wings meant to recall brownstones resemble old-law tenements instead, and the vertical panels on the facade of the nine-story block look more like giant striped signboards than skyscrapers. The pool pavilion at the western end of the complex is decorated to suggest a David Hockney painting, but again has nothing to do with New York. In fact, the project's only New York reference – the triangular openings along the base of the southern elevation – is to the ill-fated Whitney Museum additions, Graves's failed attempt to actually build in Manhattan. Inside the hotel, the themed Art Deco public spaces are dark, somber, deliberately funereal, and tomblike. Dimly illuminated signs, old Broadway posters, photographs or skyscrapers, and theater memorabilia are lost in the gloom, serving as memento mori of the era buried there. Why did the architect of the superb Swan and Dolphin Hotels at Disney World in Orlando perform so badly in Marne-la-Vallée? Is it because Graves is too strong a talent to be chained to a theme? The Orlando hotel are original and glorious creations because when he designed them, Graves was not required to tell any story other than his own. Producing a Disney version of Manhattan plainly didn't interest him.