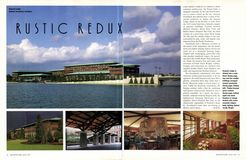 Euro Disney's tribute to America's most authentic architecture, the Prairie Style, is designed, ironically, by the only French architect to create a hotel on the site. Antoine Grumbach was selected from a roster of European architects to design the Sequoia Lodge, based on his decision to scale down the 1,011-room hotel into a lakeside complex of separate buildings. Located between Michael Graves's Hotel New York and Robert Stern's Newport Bay Club, the hotel consists of a seven-story main block facing the lake and five smaller lodges to the east, surrounded by pine, cedar, and sequoia trees imported from the Pacific Northwest. Grumbach cites a Montana vacation as the source of his inspiration, and the hotel's stone and timber massing indeed conveys the rustic air of a mountain hunting lodge. Topped with overhanging, green-tiled roofs that simulate weathered copper, the sprawling hotel also recalls Prairie Style horizontality. Inside, the wood is Arts and Crafts, with overtones of Frank Lloyd Wright. Lobbies, lounges, and restaurants are outfitted with exposed wooden beams, stone fireplaces and walls, and reproduction Stickley furniture. But Grumbach's unfamiliarity with these American architectural precedents is all too apparent; the stolid Sequoia looks more like a gloomy, overscaled Swiss Alps chalet than a Rocky Mountain lodge or Great Lakes retreat. Unlike his American counterparts, the Parisian architect lacks a flair for combining well-known architectural references into a playful ensemble. As a result, the heavy-handed, redwood-veneered Sequoia lacks the lighthearted, knowing historicism of its neighbor, Stern's Newport Bay Club, or the idiosyncratic regionalism of Predock's Santa Fe. Grumbach's heart does not belong to Mickey, and it shows.