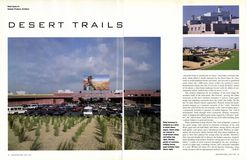 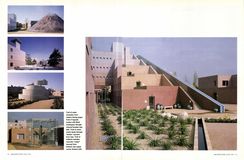 "Architecture is landscape in drag," declares Antoine Predock, whose belief is clearly expressed by his Hotel Santa Fe. Clustered to recall sandstone buttes and mesas, and stuccoed in graduated earth colors, the 1,000-room colony evokes the architect's native Southwestern terrain. But this 35-acre site is clearly Predock's version of the desert; a bare-bones landscape littered with the debris of contemporary culture: junked cars, a drive-in movie, a UFO. The architect dispersed the 42 buildings of the hotel along the southern bank of the man-made "Rio Grande," placing the tallest structures at the site's northern boundary to protect lower guest wings and adjoining courtyards from the winds that buffet the flat site. To meet Disney's theme requirement, Predock treated his Southwestern imagery as a cinematic narrative of five "trails." Stretched down the center of the site, for example, is the "trail of infinite space," a promenade intended to represent an endless highway. The "rail of monuments" leads through rocky courtyards, offering "mountain" views of stepped and shifted guest wings topped by Corbusian "spoilers"; the "trail of water" leads from the top of the tallest building down a narrow viaduct to a pool and streams. Other symbolism is more obscure. The "trail of legends" consists of five guest wings, each colored to represent archetypes of the wild West: good and evil (half black, half white); money (silver); the gold rush (gold); a jail (gray); and a whorehouse (red). Without an explanation, the structures, which contrast with their pastel neighbors, appear to have been painted the wrong colors by mistake. Moreover, their stuccoed facades fail to obscure the budget-conscious, stripped-down detailing of the project. Predock's saving grace is his "trail of artifacts," a series of icons scattered throughout the site, including a cactus in a glass cage, a smoking volcano, and a meteorite embedded in a roof. Within the Santa Fe's all-too-Spartan landscape, these wacky set pieces add an appropriately sardonic note.