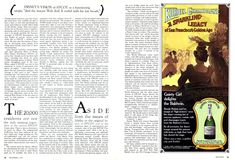 Although Mickey Mouse has always disdained the habits of his species and worn pants, untoward modesty hasn't otherwise been a problem at Walt Disney Productions. Thus, Disney considers its Anaheim theme park to be nothing less than a Magic Kingdom. When it came time to christen Disneyland’s successor near Orlando, its scope was so sweeping that the only adequate designation was World. And now that Disney has announced plans to begin construction of a spectacular expansion of Walt Disney World, the global theme is being repeated twice. The new addition to what is already the planet’s most elaborate amusement park will be called the EPCOT Center and will consist of a World Showcase and a Future World.

EPCOT stands for Experimental Prototype Community of Tomorrow, and if this ambitious title seems exaggerated, consider what Disney hath wrought so far, Walt Disney World is one of the most expensive privately owned real estate developments on earth, easily out-ranking the “new towns" that were the wonders of American urban planning a decade ago. In 1982, when EPCOT Center opens, the entire 27,400-acre Florida park will constitute a total investment of well over $1 billion, and even then it will not be finished. On the basis of Disney World alone, it might be reasonable to regard the Disney organization as one of the world’s most potent environmental-planning, development, and property-owning entities outside of a few major governments.
[…]
Even so, the current vision represents a considerable backing-off from Walt Disney‘s own fond hopes for EPCOT, and raises the prospect of an incomplete, simplified and possibly distorted view of the world’s nations and our options for the future. Construction of EPCOT Center could do much to deflate the once chic notion that the Disney organization is as bold and visionary a group of environmental planners as exists in America today.
[…]