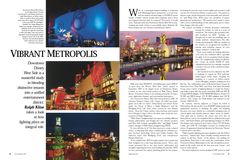 Downtown Disney West Side is a masterful study in blending distinctive tenants into a unified entertainment district. Ralph Kline takes a look at how lighting plays an integral role.

What do a pineapple-shaped building, a restaurant with Mississippi-bayou architecture, a record store with an outdoor elevated stage, a 110,000-ft2 movie theater, a boldly colored, mosaic-tiled restaurant, and a circus tent-inspired structure have in common? Not much, it would seem. That's precisely why Downtown Disney West Side is a fascinating case study of how to successfully marry distinctly different tenants into one cohesive entertainment district.

With more than 500,000 ft2 of building space and a 9500 ft2 of open area, the 66-acre West Side, which opened in September 1997, is the largest sector of Downtown Disney. Located on the east-central portion of Walt Disney World Resort, Downtown Disney is an exciting metropolis of restaurants, nightclubs, theaters, and merchandise showplaces. The Downtown Disney West Side lineup features AMC 24 Theaters; Bongos Cuban Café; Cirque du Soleil (an avantgarde circus like no other); DisneyQuest (an indoor theme park); the House of Blues; a Virgin Megastore; and the Wolfgang Puck Café. Each venue conveys its own distinct theme—from the Cuban cuisine, Latin rhythms, and tropical feel of Bongos Cuban Café to the slick, state-of-the-art environment of Virgin Megastore.