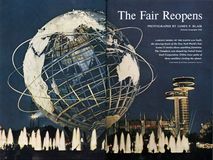 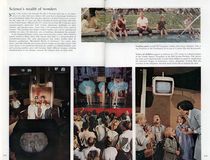 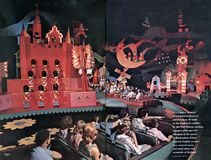 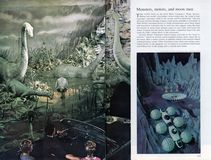 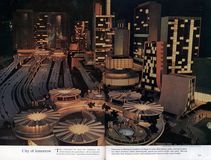 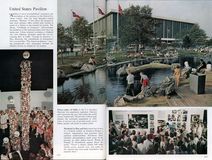 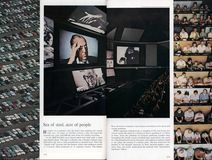 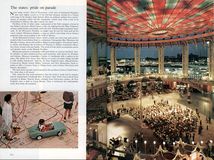 CLASSROOM IN A CARNIVAL. A journey round the world. A look back in time, and a window on the future. A treasure house of religious faiths. A procession of products. And a dream of “Peace through Understanding.” This is the New York World’s Fair of 1964-1965. Here you can see how atoms collide in the first public demonstration of controlled nuclear fusion, at General Electric. Listen to the rustle of stars as picked up by a radiotele-scope at Ford. Take a journey into space, booked by the Martin Company in the Hall of Science. See how your voice “looks” on TV at the Bell System (page 515). Sample the sights, sounds, and smells of faraway lands in the pavilions of 66 nations. Admire masterpieces: El Grecos and Picassos at Spain; Michelangelo’s “Pieta” at the Vatican Pavilion. […] Monsters, motors, and moon men Time turns back on the Ford Motor Company’s Magic Skyway. Riding new-model convertibles, whose radios play the script in four languages, spectators thrill to the savage world of prehistory: Life-size dinosaurs lumber through swamps, crane necks, and fight as if to death. A Walt Disney technique known as Audio-Animatronics gives them sound and movement. Centuries slip by and cave men appear, make fire from the friction of sticks, hunt animals, paint on cave walls, and invent the wheel. Leaping into the future, Ford creates a gleaming Space City and sends the riders sailing above it like astronauts. […] The states: pride on parade […] Pavilions of the 20 other states represented at the Fair compose a hymn to the Nation’s diversity. Illinois houses a life-size talking Lincoln. West Virginia’s artisans make banjos one month, quilts the next. Florida stages a porpoise aquacade. At the Wisconsin Pavilion, an angler may fly-cast for trout and see his catch cooked. Oklahoma displays a map on which a toy barge moves along a proposed ship canal leading to the Gulf of Mexico. […] "It's a Small World," sing animated figures of children from 26 lands in the Pepsi-Cola exhibit. In this Walt Disney creation, engagers glide past the changing of the guard at Buckingham Palace, beneath English carolers' on a crescent moon, and amid tulips and windmills of Holland. […]

(Link seems to be dead)
via Wayback Machine