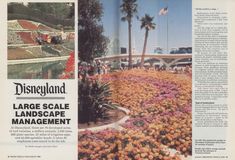 Disneyland in Anaheim, Calif., doesn't have employees. It has "Cast Members."

There aren't any customers, just guests.

And the stage isn't a raised platform in front of an audience. It's 76 acres of green turf, towering trees, and breathtaking floral displays.

The star of the show is landscape superintendent Ken Inouye, a Disneytype character himself. Inouye has the wisdom of Snow White's Doc and the smoothness of Cinderella's Prince Charming. He can oversee a landscape with the creative eye of Gepetto, Pinocchio's creator.

Of course, he has help. Disneyland's landscaping department employs 45 people, including supervisors, foremen, and an overwhelming 30 gardeners.

The crew performs an extensive amount of work during the year. For example, three pipefitters maintain an irrigation system with about 25 miles of pipes, 42,000 sprinkler heads, and 170 automatic clocks. The tree pruning crew of seven trims 2,500 trees a year, ranging from a 12-inch dwarf spruce to an 80-foot eucalyptus. With 800 plant species represented from 40 nations, landscaping is indeed the key to Disneyland's setting.
[…]