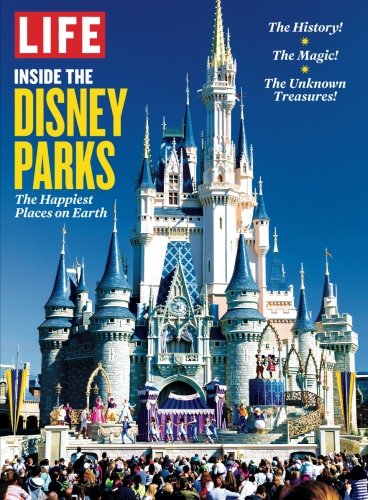 The Happiest Places on Earth!

Walt Disney spent his life dreaming impossible dreams—and making them a reality! His vision had no equal: from Steamboat Willie, the first animated short with synchronized sound, to 1937's Snow White and the Seven Dwarves, the first full-length animated feature, which became the most successful American film up to that point. By the early 1950s, Disney’s dreams had reached the height of ambition, and he set out to build the amusement park to end all amusement parks: Disneyland.

This new Special Edition from the Editors of LIFE, Inside the Disney Parks, takes you through the tumultuous design process and building of Disneyland: from the inception of the idea, stemming from Walt's obsession with model trains, to the nerve-wracking and over-budget construction—everything in the name of perfection!—the “impossible dream” endured. Despite all obstacles and a disastrous opening day, Disney created a fantasyland with such great appeal that it could be nothing but an overwhelming success: a dream that paved the way for Walt Disney World, several other parks around the globe, and helped turn Disney into a brand that became a worldwide phenomenon—changing popular culture forever.

Please note that this product is an authorized edition published by Meredith Corporation and sold by Amazon. This edition is printed using a high quality matte interior paper and printed on demand for immediate fulfillment.