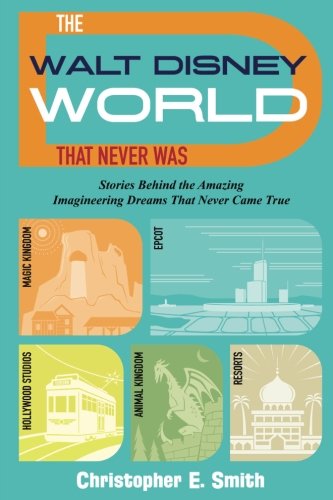 On an alternate earth, Walt Disney World guests are taking in the thrills of Thunder Mesa, braving the Beastly Kingdom, marveling at Villains Mountain, and staying the night at Disney's Persian Resort. Want to join them? This is your guidebook to the theme park that Disney never built.

In this unique, extensively researched book, Christopher Smith discusses the many attractions, shows, and resorts that were planned for Walt Disney World, from opening day to the present day, but that exist only in the minds of Imagineers.

You'll find old "favorites" such as Thunder Mesa and Beastly Kingdom, as well as those lost to the pixie dust of time, like Dick Tracy's Crime Stoppers, the Enchanted Snow Palace, and Buffalo Junction. Smith looks at the politics and internal struggles behind the decision to shelve each concept, and imagines what guests might have experienced.

Every park at Walt Disney World—Magic Kingdom, Epcot, Animal Kingdom, and Hollywood Studios—has its hidden cache of "lost" attractions. They're all here, along with the many resort hotels that Disney intended to build, but didn't.

Put aside those guidebooks of the Walt Disney World that is, and come to a vacation kingdom that you can visit only if you find the second star to the right and then keep straight on till morning.