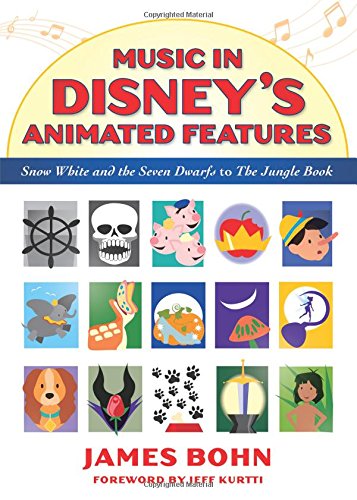 The popularity and critical acclaim of Disney animated features truly is built as much on music as it is on animation. Beginning with Steamboat Willie and continuing through all of the animated features created under Disney’s personal supervision, music was the organizing element of Disney’s animation. Songs establish character, aid in narrative, and fashion the backbone of the Studios’ movies from Snow White and the Seven Dwarfs through The Jungle Book and beyond.

Bohn underscores these points while presenting a detailed history of music in Disney’s animated films. The book includes research done at the Walt Disney Archives as well as materials gathered from numerous other facilities. In his research of the Studios’ notable composers, Bohn includes perspectives from family members, thus lending a personal dimension to his presentation of the magical Studios’ musical history. The volume’s numerous musical examples demonstrate techniques used throughout the Studios’ animated classics.