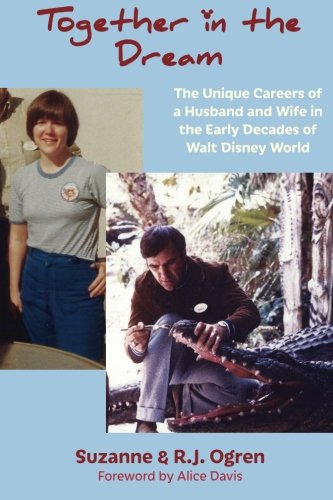 Our Careers in the Magic Kingdom

R.J. painted Animatronic figures and "plussed" attractions. Suzanne drove monorails, marched in parades, and entertained as Sleepy the dwarf. Together, the Ogrens brought their unique skills to Walt Disney World's Magic Kingdom during its formative years. This is their story.

R.J. and Suzanne were indeed "together in the dream": their adventures as husband-and-wife cast members spanned the backstage areas of iconic attractions, Main Street parades, and Disney executive offices. They worked with celebrities, Disney artists like Marc and Alice Davis, and the fun-loving, creative geniuses who called the "Animation Art Studio" home.

Among the stories the Ogrens tell:

JOIN R.J. AND SUZANNE IN THIS UNIQUE ACCOUNT OF WORKING AT THE MAGIC KINGDOM!