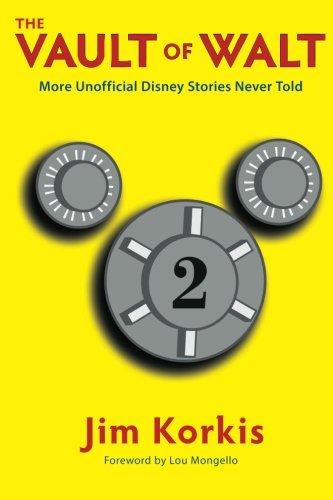 As he did in his best-selling Vault of Walt: Volume 1, Korkis digs deep in forgotten Disney lore and brings forth, in the words of well-known Disney authority Lou Mongello, stories "only Jim can weave - and told in the way only he can tell them."

Despite Jim Korkis' love for Disney, there's no sugarcoating on these stories. You'll get the warts and the wizardry, the playful and the pungent, the magical and the heretical - but most of all, you'll get what really happened, because those are the best stories of all.

* A ride through EPCOT's Spaceship Earth for a closer look at graffiti, bare breasts, and evil twins

* The bare-knuckles battle between Walt Disney and P.L. Travers over Mary Poppins

* The real story of the Jungle Cruise, why Walt's plan for live animals was shot down, and how Walt once got cheated by an impatient skipper

* How Roy O. Disney took over a demoralized company after his brother Walt's death and built a fantasyland from swampland

Any Disney fan curious about the history not told (and sometimes buried!) by the Disney Company, the history not found in other books that merely scratch the surface of Disney's rich but often forgotten past, will find it here, presented in short, self-contained chapters that span Walt's earliest years through the present.